How Does A Veteran Get A VA Claim Started? 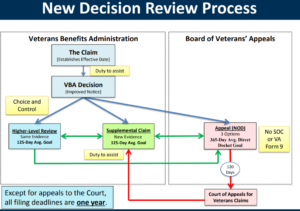 There are three ways for a veteran to initiate a claim for Veterans Benefits.  All three require the use of a specific VA form to file for the benefits.  The forms are VA 21-526ez, 21-0995, and 21-0996.  It is important to know the status of the veteran’s case in order to determine which form the Veteran should be filing his or her claim on.  Please note, this procedure for filing a claim is new as of February 19, 2019.  This is known as that Appeals Modernization Act (AMA).   If a Veteran filed prior to that date, the filing procedure would have been different.

A Veteran will use form 21-526ez to file for benefits if the claim is new and one for which he/she has never filed before or they asking VA to increase a current rating. The Veteran would list all the (new) claims on this form.  A separate form is not needed for each individual condition.

A Veteran who has previously made a claim in the past and it has been denied or would like additional evidence considered would file form 21-0995. This is known as a Supplemental Review.  Like, the 526ez, all of the claimed conditions would be listed on this form.  In order for VA to review the claim, the Veteran must submit or identify on the form new and relevnat evidence for VA’s review.  This evidence could include updated medical records, new medical opinions, lay statements (typically filed on VA form 21-4138), amongst others.

A Veteran who has received a decision less than one year prior to filing and has been either been denied or is unhappy with either the effective date of an award or the disability percentage assigned can file a form 21-0996 for a review of the decision.  This is known as a Higher Level Review.  In a Higher Level Review, no new evidence can be added to the record. The Decision Review Officer will review the file based on the evidence that is in the record and determine whether there has been an error in the previous decision. The veteran or the veteran’s representative can opt for an informal conference with the Decision Review Officer to discuss errors of fact or law in the previous decision.

Additionally, if the veteran is within the one year appeal deadline of a decision on either a new claim, supplemental review, or higher level revies, there is the option to file a notice of disagreement on VA form 10182 and request that a claim be reviewed by a Veteran Law Judge at the Board of Veteran’s Appeals.  If theVeteran still disagrees with the VA’s decision, a case can be initiated against the Commissioner of VA in the federal courts.

Under any filing scenario above, if the Veteran receives a denial of the benefits, and has additional evidence related to the claim he or she has one year to file a supplemental review on for 20-0995.  By filing within the one year window, the Veteran’s effective date for the claim is protected, and should the benefits be awarded, the veteran should receive backpay back to the date the claim was initiated. This remains true so long as they continuously apply within the one year period of the last denial, no matter how many times the veterand had to submit supplemental claims with new and relevant evidence.

For Veterans who filed their claim prior February 19, 2019, their claim is considered to be part of the Legacy Appeals system.  Their appeal process may or may not be different than that set out above.  A Veteran within the Legacy system may have the ability to opt in to the AMA system, depending on the position of their claim.

A Veteran with questions regarding their claims and whether it is part of AMA or Legacy should consult with the experienced attorneys at Tabak Law, LLC to determine the best way to move the claims forward.