The story of Camp Lejeune is an unfortunate one in the history of the military. But luckily, there are now benefits available for a plethora of veterans who were stationed at Camp Lejeune in the past. As a top veterans benefits lawyer, we are now helping Camp Lejeune veterans receive benefits help here at Tabak Law.

If you are not familiar, the narrative of Camp Lejeune centers around water contamination and the effects that it is now having on those who were stationed there. The groundwater was contaminated from leaking storage tanks from 1953 to 1987, with known chemicals such as percholoroethylene, trichloroethylene, vinyl chloride, benzene and other petroleum contaminants. Marines and their families were using the contaminated water on a daily basis for cooking, bathing, and of course, drinking. As a direct result, many veterans and their families that were stationed at Camp Lejeune have been afflicted with a number of diseases over the years. 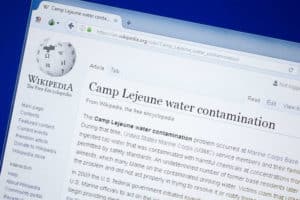 Previously, anyone that had been affected by a specific list of diseases in connection to Camp Lejeune water contamination had to prove a service connection to the disease to receive disability benefits. This means that they had to undergo extensive screenings and paperwork to provide clear evidence that toxic water caused their condition. Often, this was too expensive and difficult for veterans to follow through with. Thanks to a new ruling from the VA, there is now a presumption of service-connection that is connected with eight specific diseases that have shown a link to this specific contamination. This presumes a connection for someone affected with one of these diseases that was stationed at Camp Lejeune – greatly mitigating the red tape. This is outstanding news for veterans and their families.

The Veterans Administration has opened the presumption up to eight diseases that are common with those who were exposed to Camp Lejeune water. They are:

The Veteran’s Health Administration also has a list of additional presumptive diseases that qualify Camp Lejeune Veterans and families for healthcare. This is separate than the VA disability care covered in the above list of eight.

Under the new rule of extended presumption for VA disability benefits related to toxic water, there are only certain dates that qualify. The veteran will have to have served between Aug. 1, 1953 and Dec. 31, 1987 at Camp Lejeune. But, there has been a change for time served at the camp as well. The rule states that the veteran must have been stationed there for at least 30 days. In addition, the 30 days do not need to be consecutive, potentially including a large number of additional applicants that were affected due to timeframe of exposure.

Another significant change includes coverage for Reserve and National Guard personnel, in addition to Marines who were included previously. This is another big win, as it is an expansion of the definition of veteran in terms of benefits application.

If you need Camp Lejeune veterans benefits application help, or you have previously been denied benefits for this or other reasons as a veteran, don’t hesitate to reach out to Tabak Law. We provide a completely free consultation to talk through your case and we don’t charge any fees unless we win.